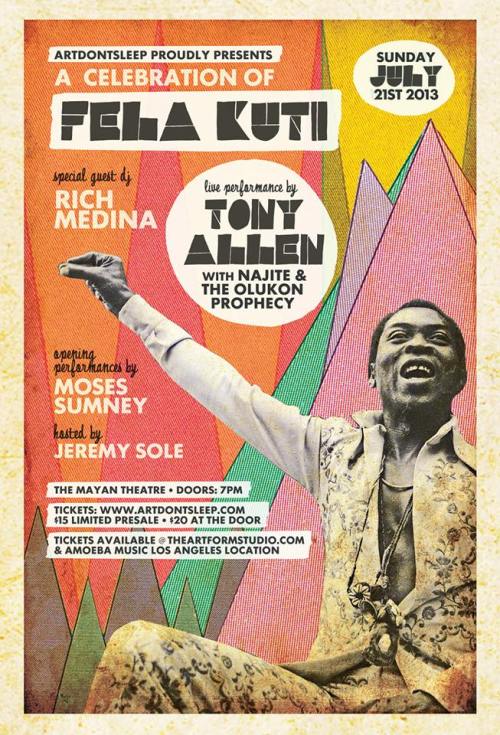 Promotional Support by: LA Weekly, KPFK and FusicologyDig Deeper:
TONY ALLEN:
Today living in Paris, Allen has long been acknowledged as Africa’s finest kit drummer and one of it’s most influential musicians, the man who with Fela Anikulapo Kuti created Afrobeat – the hard driving, James Brown funk-infused, and politically engaged style which became such a dominant force in African music and whose influence continues to spread today.

Allen was playing with the Western Toppers when he met Kuti in 1964. “Fela had been presenting a jazz records programme on NBC (Nigerian Broadcasting Corporation) on Friday nights. He decided he wanted to form his own jazz band and play the music himself in the clubs. He’d tried out several drummers, but none of them were what he was looking for. He began to think there was no-one suitable in Africa. Then someone recommended me to him. I auditioned – and he asked me if I’d learnt to play in the USA! I had the style he wanted. We played strictly jazz together for about a year, as the Fela Ransome Kuti Jazz Quartet, before we started Koola Lobitos.”

Koola Lobitos, formed in 1965, played a mixture of highlife and jazz. A few years later, at the urging of funk musicians including Bootsy Collins and other members of James Brown’s band they met on tour in the US, Kuti and Allen simplified things further. “One idea, one song” became the Afrobeat paradigm).

Koola Lobitos’ nascent Afrobeat would have been nothing without Allen’s innovative bass drum patterns, which were unlike those used by any other kit drummer working in Lagos at the time. His bass drum dealt a double whammy, b- boom, b-boom. Where other drummers would play a single beat, Allen made it a double, giving Afrobeat its trademark forward thrust. “The bass drum patterns are unique to me,” says Allen. “I’d never play one, one. Any drummer can play that straight beat. But that’s just like putting a metronome in there.”

In 1969, Koola Lobitos made an extended visit to the US, where they lived a hand to mouth existence. “The living conditions were rough,” says Allen. “We started on the east cost, where there were lots of Nigerian students, and we did well there. Then we went west, via Chicago, to San Francisco and Los Angeles.” Audiences, which were still largely composed of Nigerians, grew smaller. “Fela got fed up just playing to Nigerians. He said if we were going to play to Nigerians, we might as well do it in Nigeria where there were a lot more of them.” The Koola Lobitos album The ‘69 Los Angeles Sessions, made on the hoof towards the end of the tour, documents the emergent Afrobeat style of the band.

Kuti’s political consciousness, nurtured by his politically active parents back home – and soon to become a defining feature of Afrobeat – was sharpened in the US, where he befriended a black American woman called Sandra Isidore. A member of the Black Panthers, Isidore introduced Kuti to the ideas of such people as Malcolm X, Angela Davis, the Last Poets, Stokeley Carmichael and Eldridge Cleaver, all of whose thinking played some part in the development of Kuti‘s own political philosophy, Blackism.

Once back in Lagos, Kuti renamed the band Africa 70 (it had in the US briefly been Nigeria 70, and was later tweaked to Afrika 70). With Allen forging the music’s vibrant signature rhythms, and Kuti its incendiary lyrics, the duo had, within a few years turned Afrobeat into a style rivaling the then reigning juju and highlife in popularity.

“Fela said I sounded like four drummers,” says Allen. “I was the only one who originated the music I played.” Fela used to write out the parts for all the other musicians. If Allen sounded like four drummers, it could have been because, in his mature Afrika 70 style, he was drawing on four different styles – highlife, soul/funk, jazz and traditional African drumming. A unique and mighty sound. (In 1970 when James Brown played in Nigeria, his arranger made careful study of Fela’s band and Allen’s drumming in particular, as did Ginger Baker, another disciple).

In 1975, Allen recorded his debut album, ‘Jealousy’, the first of three made with Afrika 70 and produced by Kuti. ‘Progress’ followed in 1976, ‘No Accommodation For Lagos’ in 1978. But by 1978 he was ready for a change of scene, and a year later he parted company with Kuti. The touring entourage had grown to outlandish proportions and there was talk of him not getting due respect or recompense for the contribution he had made to the creation of Afrobeat and the success of Afrika 70. “It’s not a big story,” says Allen today. “I was tired, I’d just had enough.” His final studio collaboration with Kuti was on an album made with American vibraphonist Roy Ayers, ‘Africa Centre Of The World’ (released in 1981). In 1979 he formed his own band, Tony Allen and the Afro Messengers, and recorded his first album away from Kuti, ‘No Discrimination’.

“Music is my mission,” says Allen. “I never get satisfied and I’m still learning from others. The musical world is very spiritual, and I don’t think there’s an end to it. As musicians, it’s our mission to keep going.”