Take Me With You! : Listening/Release Party*

• Join us as we celebrate the release of “Take Me With You” on Friday, February 4th in Los Angeles!

“Take Me With You” is Available NOW on: http://mochilla.com/shop

Tagged B+, Coleman, connect, DJ Numark, Mochilla, Take Me With You 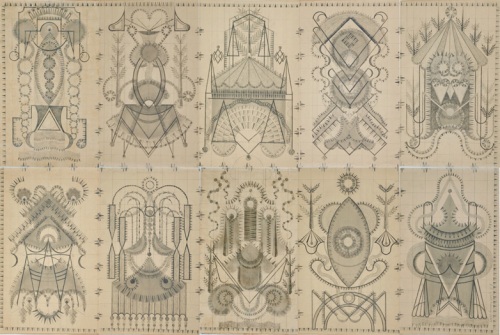 A Decade of Mochilla (Parts One and Two)

these two exclusive downloads are sneak-peak gems from Mochilla to you in celebration of the 10 years of Mochilla double CD coming out in 2011* Both are mixed by Eric Coleman of Mochilla. Right click on the link [save link as..], download, enjoy and TURN IT UP!!

VTech Presents: A Decade of Mochilla (Part One)

VTech is proud to present, A Decade of Mochilla, an epic mixtape, spanning Mochilla’s 10 Years Mixed into one mixtape and shared with you in two parts. This is Part One…

Mochilla is really more than ten years old. It was 1998 when Coleman and I explained to our Mexican producer on the set of the Control Machete video for Ileso that we would only shoot with the equipment that fit in our backpack. It was a Jansport (for clarity!). He replied… “Oh ok, you guys are the Mochila guys, Mochileros”. Of course we loved the word mochilla (the Spanish for backpack) but apparently didn’t know how to spell it thus the two Ls!

In 2001 we released our first project commercially under that name. Keepintime was a photo-essay that under the tutelage of Adam Glickman at Tokion became a short film. He initially thought of it as a piece to put on that new thing – the internet. But when it ended up being 12 minutes long we decided it was too long so we made a VHS to sell – we pressed up a thousand and they flew out the door.

Keepintime: Talking Drums and Whispering Vinyl became a Film Festival favorite and then the calls started. In the ten years since then Mochilla has grown. We have an office now and a micro staff of dedicated, talented people. We have travelled the world, made films about all kinds of music, crossed all kinds of boundaries, worked with people from 5 to 95 years of age and we are having a lot of fun the process. Along the way we have made an archive of photos, videos and audio. It is filled with glorious performances, tough breaks, ambitious harmonies and a lot of soul.

Early in 2011 we will be releasing a two CD Mix of these performances – one live and one live in studio.

As a seasonal gift to our friends at VTech we have decided to sneak you this first 20 minutes of the first volume. This is truly only a sneak peak in to the vast musical vaults of Mochilla. Coleman has sat thru many hours of music, digging in and around multi-tracks of kicks, snares and scratches. It is almost unfair to try to encapsulate all of this wonderful music into 2 CDs, but he did. Next week we will have another 20 minutes from the second CD, the studio sessions.

There’s a lot of memories here. A lot of magic.

The response to the first part of this mix has been incredible. Thank you for all the support and retweeting, reposting. Mochilla loves the love. Part two here today for download is stepping the game up and to quote Coleman “I wanted this mix to slap everyone in the face and get them to pay attention.” It is purely rhetorical of course, our version of a slap in the face is the caress of bossa nova, the thump of cumbia or the heart stopping wind sucking gaps of great syncopation. This mix has all of that.

Remember of course these are 20 minute teasers for the full mixes coming in 2011.

Just a quick note on the photo that we used on the cover – I snapped this one at the great “La Marcha” way back in 2001. It was taken in the Zocalo in Mexico City and Maldita Vecindad were performing in solidarity with the EZLN. The kid on his friends shoulders with the El Che shirt embodies all that we wanted Mochilla to be way back in 01 – engaged, excited, energetic and happy. Our brother and design guru Keith Tamashiro flipped it into our first logo and Stephen Serato has reflipped it into our 10 year mix cover.

This will warm your ears, brighten your heart and remind you of the strength of good music, download, hit play and you know – turn it up…

Thanks for all your support and happy holidays,

I’d like to invite you to join me on dublab.com for their Sounds of Symmetry Proton Drive as I share some of the music that has been in heavy heavy rotation in my Jeep, at the MochillaHQs &/or at the crib since my last solar return. Help me celebrate my bornday by listening LIVE on dublab.com!

The amazing Internet Radio Boombox (IS9181 Wi-Fi Internet Radio) is Also part of the “Flash Pack” Courtesy of VTech with a Proton Drive Donation for Dublab.com.

The VTech Wi-Fi Boombox has become an essential part of the way I start my day and the way I spend it… it makes constructive and creative days at home beam that much brighter… I’ve woken up to some of the most amazing sounds (and rare to top it off!) from brasil to Africa before even leaving my bed. Since it connects to the web I also get a heads up on the weather and can listen to dublab.com without having to open my computer! I completely fell in love with it!

Pick one up for yourself or for one of your music loving friends by visiting dublab.com. Mochilla and Vtech have graciously contributed some special items for the “Flash Pack” [All 3 2xLP Timeless Concert Vinyl Set (+MP3 download card) & the VTech WiFi Boombox!] especially for Dublab’s Sounds of Symmetry Proton Drive fundraiser broadcast which is happening now. (details below) 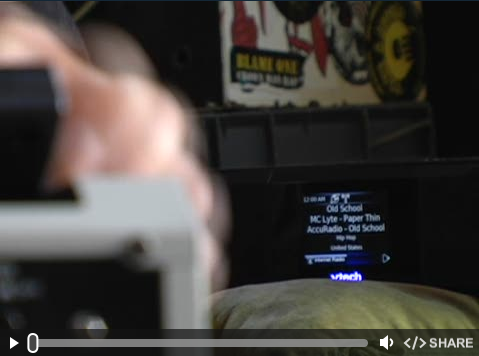 From November 1-19th, 2010 dublab djs and our extended family of creative music minds will be broadcasting live on dublab.com, sharing electrifying sounds to inspire support. You can help us send positive waves around the universe by giving a generous Proton Grant at dublab.com!

+ BRILLIANT RAYS OF GRATITUDE SHINING BACK TO YOU!!!

ALL THE PRIZES FROM THE $100+ LEVEL PLUS…
+ WHERE NEXT ZINE BY J.MENDEZ
+ TRACE: THE NEWEST ISSUE OF PIE PAPER
+ DUBLAB / STONES THROW : SOUNDS OF SYMMETRY SPLIT 7 INCH VINYL WITH LIMITED EDITION HANDMADE COVER
+ EXTRA EXTRA EXTRA GEMS (gifts from our stash of cds, dvds, buttons, magazines, stickers, t-shirts and more)

Please visit dublab.com/dubstream to see a fully updated programming schedule.
dublab is a non-profit web radio station and creative collective devoted to the growth of positive music, arts and culture. 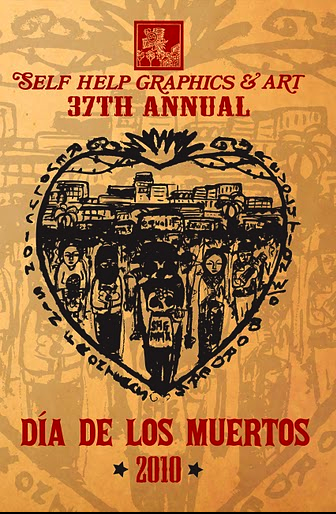 Led by premier altar maker and community resident Ofelia Esparza and assisted by the entire Esparza Family. Everyone is invited to contribute ofrendas to Self Help Graphics & Art’s Community Altar. We encourage you to bring copies of photos of revolutionaries in your family. 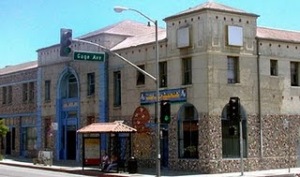 4 p.m. – Day of the Dead Procession – Join us with Calacas and face painting at Belvedere park’s Virgen de Guadalupe Mural Located at, the corner of Cesar Chavez Ave. & Mednik Avenue

while digging on the web today i ran into images that took me back to 2007…
i absolutely loved working this shoot. big ups to retna and juxtapoz!
hidden trac(k) memories*

Although the Original Mural was only supposed to stay up for one night due to location regulations, Retna flipped the OG type and aged it quite beautifully for this Juxtapoz spread (dusk remained intact until the location was remodeled). Peep the original mural by Augustine Kofie and Retna for Hidden Trac(k) Vol.1 (c) 2007: 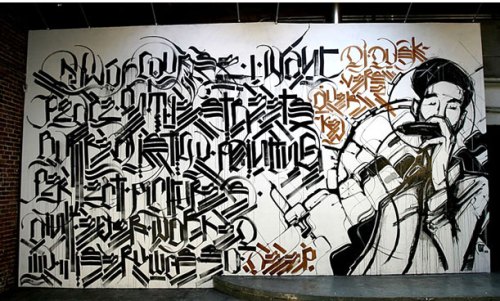 Words on the left read: “Now of course I want peace on the streets- But realistically painting perfect pictures ain’t never worked- My misery was so deep.” ~2Pac —-The names in gold read: “DJ Dusk, Verse, Ayer, Kev” Fallen Soldiers.~Kofie

Tons of love to The Captan Family!

some scorpios and an owl.

This was/is absolutely one of the most fascinating parts of the
Original Willy Wonka & the Chocolate Factory (1971) mainly due to it’s rhythmic, poetic and psychedelic feel…

“There’s no earthly way of knowing which direction we are going. There’s no knowing where we’re rowing or which way the river’s flowing. Is it raining? Is it snowing? Is a hurricane a-blowing? Not a speck of light is showing, so the danger must be growing. Are the fires of hell a-glowing? Is the grisly reaper mowing? Yes, the danger must be growing ’cause the rowers keep on rowing, and they’re certainly not showing any signs that they are slowing. AAAGGHHH!!!”

There is no doubt that there are flowers oscillating wildly with joy from finally picking such a relaxing, fresh yet strangely nostalgic album, I didn’t realize how much I missed coming home with such a great sense of urgency to touch needle to wax, to unravel the packaging and dive in. Setting aside the mp3 + detaching from the matrix + the mean screen (and yet raving and ranting on it). Nonetheless, it’s the simple things – Instrumentals for the mental. Loving this feeling – this physical connection with what keeps my heart happily beating.

this cat// with impeccable rhymes and samples// placement held with mathematical precision// futuristic // fortune telling// historian// like a map writer// smooth samurai song// a guide// simply amazing// on heavy rotation// from dilla to an eternal sunshine// he was born ready!
-LaMujerIv (wyldflwr)